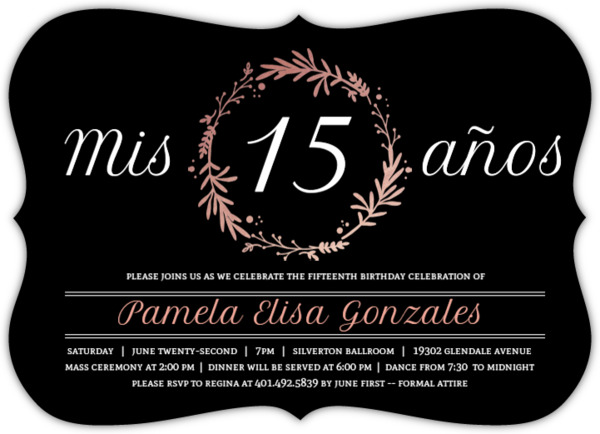 The origins of the Quinceañera can be traced back to the Aztecs as early as 500 B.C. Boys came of age at fifteen and became warriors. Girls then were also presented to the community at this age because they could bear children and therefore, create more warriors. The Quinceañera celebration has evolved into more of a right of passage for Latina girls on their fifteenth birthday. The birthday girl is presented to society as a young lady, no longer a little girl. Depending on the family’s country of origin, the Quinceañera celebration has various takes on the tradition. Though most 15 year-olds are not yet ready to leave their families, the significance of the age represents a new stage in life and new responsibilities.

Each Quinceañera will be unique to the family’s budget, culture, class, and the birthday girls wants and wishes. One tradition that is part of all Quinceañera events is the Quinceañera’s dress. It is typically a very formal ball gown. Some cultures pass down Quinceañera dresses, some have them made and others go for ready made dresses. Some modern Quinceañeras choose more colorful attire while traditionalists go with white or pale pink.

PurpleTrail.com offers a variety of customizable Quinceañera party invitations in formal, elegant, modern, and more styles. Add unlimited photos, change text and colors to match your party theme. In addition to the above, check out PurpleTrail’s selection of custom party banners and personalized framed prints. You can choose from one of our professionally designed templates or create your very own to match your decor perfectly.

Typically the birthday girl will arrive to the event in flat shoes. She is later given high heels put on by her father to signify her transition from child to woman. Traditional gifts may include a crown or tiara, earrings, a ring, a bracelet, a cross, necklace, a Bible or rosary. These gifts are presented on a small pillow decorated with the young lady’s name on it.

When the Spaniards came to America, European and Christian traditions were integrated into Quinceañera celebrations. Traditional celebrations may have had a religious ceremony at an indigenous altar with traditional dances. With Christian integration, the ceremony evolved into a Christian altar service and the waltz was introduced. It is said the Maximilian, the 19th century Mexican Emperor and his wife Charlotte, incorporated the tradition of the waltz and European style dresses. Therefor at the reception, typically a waltz takes place.

The corte de honor (court of honor) may also be present at the Quinceañera. It is typically comprised of 7, damas (girls) and 7 galanes (boys), that together with the Quinceañera, make fifteen young people at the ceremony.

A dance between father and daughter is often a part of the Quinceañera.

If the young lady has a younger sister, she will often present a porcelain doll to her. This signifies the last of her toys as she enter young adulthood. Otherwise the doll still acts as a symbol of the transition from child to woman.

Guests usually receive small tokens, capias (ribbon printed, with girl’s name and birth date on it), and cerámicas to commemorate the celebration.

A toast is given in the Birthday Girl’s honor. Sometimes each guest is invited to give a toast separately.

The traditions may vary from family to family but the constant is that the girl begins the day a child and ends it as a young woman, ready to take on the world.