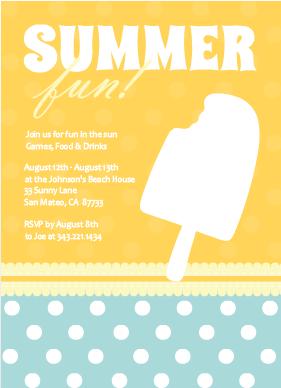 Get your guests out of the lawn chairs and the kids out of the house with some classic party games. Set the tone for your party with amazing party invitations. Then take a look at our favorite outdoor party games and pick your favorites to play!

Divide all players into two equal teams. Determine a playing area with boundaries on all four sides. Team 1 should form two lines facing each other. There needs to be at least 50 feet of space between both halves of team 1 to give team 2 some moving room. Team 2 should scatter anywhere between the lines of team 1. Two or three playground balls are used.

Team 1 throws balls at team 2. If a player on team 2 is hit below the shoulders, they are out. If a player on team 2 catches the ball in the air but not after a bounce, they receive a free ‘life’. Then, if they are hit again, the free life is used up but the player is not out. A player may not receive more than three free lives. However, if they catch the ball a fourth or fifth time, they may bring a player who is out on their team back into the game. After all players of team 2 are out, the teams switch places.,

Pair off players into groups of two and have them face their partner about 3 feet apart. Begin tossing balloons to each other. Every time the balloon is caught the player that caught the balloon takes a step back. Eventually someone is going to get wet! The Winning team makes it the farthest apart while still successfully catching the water balloons.

Tell participants before the contest that you will be having a “hula” contest and encourage them to practice. You can then have a contest for the most hula hoops at one time, the longest time with one hoop, or running with a hula hoop, towards a, goal and back.

Start by setting a boundary for the game. A player is chosen to be “it” or “the blob”. All of the other players run from “the blob”. When a player is tagged by “the blob” they join hands to form a larger blob and continue chasing the other players. Once the blob has four people, it splits into 2 blobs (2 pairs) and each blob continues chasing the others. The last person caught then becomes “the blob” and the games starts over again. Your guests will love this outdoor party game idea!

Divide the players into two evenly numbered teams. A team should have a minimum of 3 players, but 5 works better. Choose a team to go first. One member of that team should stand in the pool. The other members of the team will line up from the hose to the pool and form an assembly line. One member of the team will work the hose–the others will pass the bucket. Inform the team that they will pass buckets of water “down the line” to fill the pool to a depth of 2 inches. You can adjust the depth based on the size of the pool. The game will end after 5 minutes if they do not reach the goal. Start the game with the start of a stop watch. The passing continues back and forth until the team reaches their goal or they run out of time. The team uses a ruler to measure the depth. Once the depth is reached all members of the team must jump into the pool to stop the clock. Mark down the time. Have the second team (and others) play and then announce the winner!

Divide all the players into two teams. Have each team form a line with their hands on the waist of the player in front of them. Set up a chair or flag about 30 feet away in front of each team. On the start signal, the team runs, with the team behind, around the chair or the flag and returns back. While running no one can take their hands off the waist of the person in front of them. If the chain is broken the team looses the game. The first team back wins. An outdoor party game classic!

Divide into two or more teams. Choose one team to go first. The first team gets into the pool, standing or sitting. Have someone ready to watch the clock for 60 seconds. At the start of the clock, throw 20 large ice cubes in and see who can take the most ice cubes out using only their feet in the designated time. Once time is up, have the other teams try. The team who got the most ice cubes out of the pool is the winner! A cool outdoor party game to play on a hot summer day!

This game is similar to Red light green light. There is a goal line and a starting line. The player who is “mother” stands at the goal line. The other players line up about 20 feet away at the starting line. “Mother” faces away from the line of players. There are several kinds of steps (see below). The “mother” addresses one player at a time to “take one giant step” or “take 5 baby steps” or “skip 3 regular steps”, etc. but always beginning with their name such “Tim, take 2 baby steps”. That player must remember to say “Mother, may I?” and wait for permission before he can advance. Then “mother” says either “yes” or “no” depending on what they want to do. If the player forgets to ask permission first, he must return to the starting line. The “mother” then addresses another player on the line and continues until one player finally reaches the goal line. That player then becomes the “mother.”

Types of steps: Baby step – take a teeny, tiny step forward
Regular step – take a normal step forward
Giant step – take a large step forward
Ballet step – each step consists of a complete spin in a circle so three steps would be three circles
Banana step – the player lays down and marks where his/her head is at and then stands there.
Bunny step – a hop forward
Scissors step – jump forward while crossing feet. If ‘mother’ announces two scissors steps, you can uncross them on the second jump forward.

What Time is it Mr. Clock?

One person is designated “Mr. Clock”. They stand on one side of the yard or driveway. Everyone else stands on the other side of the yard or at the other end of the driveway. The group then asks in unison, “what time is it Mr. Clock?” Mr. clock then responds with the time. It can be any hour of the day that Mr. Clock chooses (ie. 2 o’clock). Each person then needs to take the number of steps that correspond with the time toward Mr. Clock. For example, if Mr. Clock says it’s 5 o’clock, everyone takes 5 steps toward him. It is up to the individual how large they make each step. The group continues to ask the same question, while Mr. Clock replies with different answers as to “what time it is.” Before the players reach Mr. Clock, he or she answers the question “What time is it Mr. Fox,” with the answer “dinner time”. He chases everyone until he catches someone, or everyone makes it back to the base safely. If anyone is caught, then they become “Mr. Clock”. This outdoor party game idea will surely make your celebration a hit.

Print a list of nature items for the hunt. Give players or teams the printed list of nature items to find. Some suggestions are rock, leaf, bug, pine cone, twig, something red, yellow,orange, or other color. The first player or team to report back with all of their items wins the prize.

Tie a blown up balloon to each participant’s ankle with a string. At the ‘Go’ signal, everyone runs around trying to stomp on and bust each others balloons. The last person with an intact balloon wins. A simple, yet fun outdoor party game idea!

We hope you enjoyed our outdoor party game suggestions. Try to choose a game that fits the interests of you and your guests. You can also make adjustments to make the games for fun and personal. Share your favorite games in the comments.