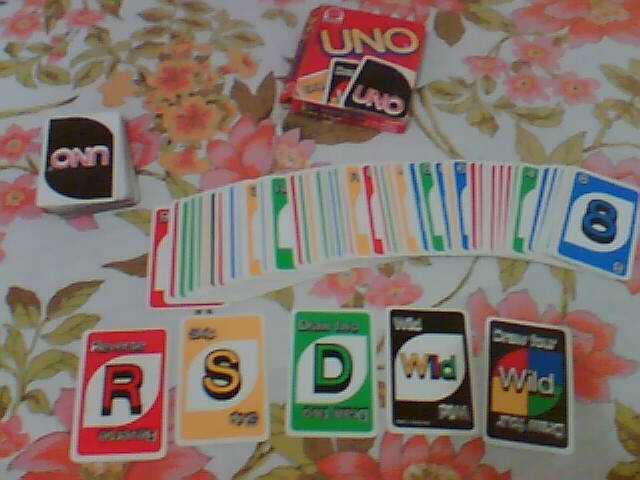 With rainy, cold winter days ahead of us, the kids will definitely be looking for some good inside entertainment. We’ve put together a list of four fabulous cards games perfect for busting kid’s boredom.

A game for 2-5 players, using a standard 52-card deck. Each player gets seven cards (or five, if more than three players). The object is to make “books” four cards of the same value (e.g. four 2’s or four Queens). Each player asks for cards to complete their books, and if the cards are not available the player has to “go fish” (draw a card from the stock). The game continues until someone has no cards left in their hand. The winner is the player who then has the most books.

UNO is one of the world’s most popular family card games, with rules easy enough for kids, but challenges and excitement enough for all ages.

Each player is dealt 7 cards with the remaining ones placed face down to form a “draw” pile. The top card of the draw pile is turned over to begin a “discard” pile. The first player has to match the card in the discard pile either by number, color or word. For example, if the card is a red 7, player must throw down a red card or any color 7. Or the player can throw down a Wild Card. If the player doesn’t have anything to match, he must pick a card from the draw pile. If he can play what is drawn, great. Otherwise play moves to the next person. When you have one card left, you must yell “UNO” (meaning one). Failure to do this results in you having to pick two cards from the draw pile. That is, of course if you get caught by the other players. Once a player has no cards left, the hand is over. Points are scored and you start over again.

Crazy Eights, also known as Eights and as Swedish Rummy, is a distant relative of Rummy. It’s known as a “stops” game because players can be stopped from discarding if they don’t have a proper card. It’s believed that Crazy Eights can trace its heritage back to the mid-1600s and a French gambling game known as Hoc.
This game is good for 2 to 4 players.

This children’s game can be played by two or more players. From a standard 52 card pack remove one queen leaving 51 cards. Deal and play are clockwise.

The dealer deals out all the cards to the players (generally some will have one more card than others – this does not matter). The players all look at their cards and discard any pairs they have (a pair is two cards of equal rank, such as two sevens or two kings).

The dealer begins. At your turn you must offer your cards spread face down to the player to your left. That player selects a card from your hand without seeing it, and adds it to her hand. If it makes a pair in her hand she discards the pair. The player who just took a card then offers her hand to the next player to her left, and so on.

If you get rid of all your cards you are safe – the turn passes to the next player and you take no further part. Eventually all the cards will have been discarded except one queen (the old maid) and the holder of this queen loses.

Old Maid is sometimes played with a special pack of cards: all the cards come in matching pairs except for a single Old Maid card, whose holder at the end is the loser.