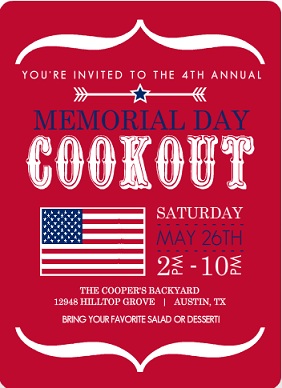 Did you know according to the Flag Code, the U.S. flag represents a living country and is itself considered a living thing? Since there isn’t anything law enforcement can do when the Flag Code is violated, most people pay no attention to or are simply unaware of American flag etiquette. Traditional observance of Memorial Day seems to have faded in recent years and many Americans may have forgotten the meaning of this holiday. Use this list of Memorial Day American flag etiquette to learn more about this very special holiday.

A hero is someone who has given his or her life to something bigger than oneself.

Here’s a quick history lesson: Memorial Day was officially proclaimed by General John Logan, national commander of the Grand Army of the Republic, on May 5, 1868. It was first observed on May 30, 1868 when flowers were placed on the graves of Union and Confederate soldiers at Arlington National Cemetery. After World War I, the holiday changed from honoring just those who died fighting in the Civil War to honoring Americans who died fighting in any war. It is now celebrated in almost every State on the last Monday in May (passed by Congress with the National Holiday Act of 1971 (P.L. 90 – 363). (www.usmemorialday.org)

The American flag is a powerful symbol that holds great meaning to many Americans. The American flag represents our freedoms, values, and strengths as a country. Because it is such an important symbol, there’s specific American flag etiquette that must be followed. As you honor American soldiers this Memorial Day, keep these flag flying tips in mind. For a complete listing of U.S. flag etiquette, please click here.

Old Glory is a common nickname for the American flag. The name originated during the early 1800s when a young New England sea captain, William Driver, was given an American flag to fly aboard his ship throughout his travels at sea.  Driver nicknamed his flag Old Glory. Driver held onto the flag until old age. He remained an avid patriot throughout out his life; and displayed his flag for special occasions, elections, holidays, and his birthday. The popularity of Driver and his flag grew and eventually Americans began using the nickname Old Glory when referring to all American flags.

The American flag is the fourth oldest national flag in the world. It is older than both the French Tricolor flag and the Union Jack of Britain. The American flag was authorized by the Continental Congress on June 4th, 1777. Later in 1949 President Truman officially declared June 4th as Flag Day. The first American flag of 1777 had 13 stars and 13 stripes. One for each colony. It wasn’t until 1818 that President James Monroe signed the Flag Act, which stated there would be 13 stripes and one star for each state. The final star was added to the flag when Hawaii became a state in 1960.

Hope you enjoyed these American flag etiquette tips and suggestions. Have fun celebrating this special holiday with your friends and loved ones. Remember to pay respect to all of the brave individuals who have dedicated their lives to protecting our country. Happy Memorial Day!