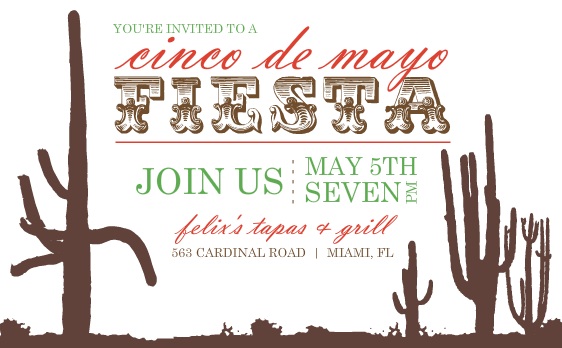 Celebrate the Mexican fiesta of Cinco de Mayo on May 5th. This is one of the most popular Mexican festivals celebrated in the United States. As you plan a party for your friends and family and get ready to send out your Cinco de Mayo invitations brush up on what this festival really means with our Cinco de Mayo trivia and facts.

Why is Cinco de Mayo celebrated? This day marks the victory of a small, poorly armed force of around 4,500 soldiers over the French invasion of a well-armed, professional army led by Napoleon III that had about 8,000 soldiers. This battle is popularly known as the legendary Battle of Puebla. The battle lasted for 4 hours and ended in the victory of the small Mexican army under Gen. Ignacio Zaragoza. So Cinco de mayo is hugely celebrated with pomp , gaiety and fiestas in the traditional Mexican style.

“Public memory of the Cinco de Mayo was socially, and deliberately, constructed during the American Civil War by Latinos responding to events and changes around them,” says historian David E. Hayes-Bautista. “” The key events were taking place in Mexico in response to a French invasion.

What is the importance of Battle of Puebla? The battle of Puebla took place on May 5, 1862 . This battle marks a turning point in Mexican national pride. They won the battle over huge French troops. This victory made the Mexican people very happy, and helped create a feeling of national unity. Puebla is 100 miles east of Mexico City. The Mexican forces were made up of untrained commoners. The “Batalla de Puebla” became a symbol of Mexican unity and patriotism. 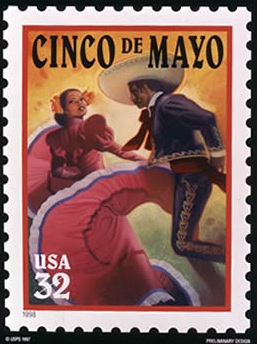 Do you know how and when Cinco de Mayo celebration started in the US? On  August 24, 1821, Mexico officially declared its independence from Spain when both parties signed the Treaty of Córdoba. A 2007 UCLA Newsroom article notes that “The holiday, which has been celebrated in California continuously since 1863. TIME magazine reports that,”Cinco de Mayo started to come into vogue in 1940s America during the rise of the Chicano movement.” Chicanos at that time, were looking for a way to represent and celebrate their Mexican heritage. The holiday eventually became more widely celebrated outside of just California and was celebrated all around the United States in the 1950s and 1960s.

How is Cinco de mayo celebrated? Cinco de mayo is celebrated with festivals and fiestas. Parades usually start moving about 11 o’clock. The parades consist of marchers dressed as French and Mexican generals with soldiers following, armed like the original freedom fighters with machetes and old-fashioned rifles. Paraders wearing skirts and flowery hats represent the women (soldaderos) who traveled with the army to cook and care for the men. Those portraying French soldiers carry knapsacks with wine bottles sticking out of them. At mid-afternoon the “battle” begins in the plaza. Rifles and cannon roar, there is much smoke and shouting, and at nightfall, the Mexican and French generals meet face-to-face for a sword battle. The Mexican general, of course, wins. The fiesta also includes speeches by government officials. And since it is a fiesta there are lots of games and lively dances , mariachi music, traditional foods, bullfights, and colorful cinco de mayo decorations. At night there are pinatas for the children and the celebration ends with beautiful displays of fireworks. People wear clothes of red and green, the colors of the Mexican flag.

Why Cinco de Mayo is celebrated in U.S? The reason of celebrating Cinco de Mayo on such a large scale in United States is firstly, because if had not been for the victory, France would have aided the South in the American Civil War and this would have an impact on the war. Secondly Chicanos celebrates this day in appreciation of its cultural and historical significance. And lastly General Ignacio Zaragosa was born in Texas when it was still part of Mexico and is considered to be a Chicano hero. However, today this holiday is more of a celebration of Mexican culture, food, music and beverage unique to Mexico.

Why is Cinco de Mayo So Important for Americans? In addition to its importance in Mexico, Cinco de Mayo is significant to all Americans because it marks the last time that any foreign power has acted the aggressor on North American soil.

Did you know “Festival de Fiesta Broadway” is worlds largest Cinco de Mayo event? Yes! the largest Cinco de Mayo event in the world is held in Los Angeles, California, where more than 600,000 people celebrate with music and food. The whole event is called Festival de Fiesta Broadway. Two other big festival are held far from Mexico, in Denver, Colorado, and St Pauls, Minnesota, but they draw hundreds of thousands of participants.