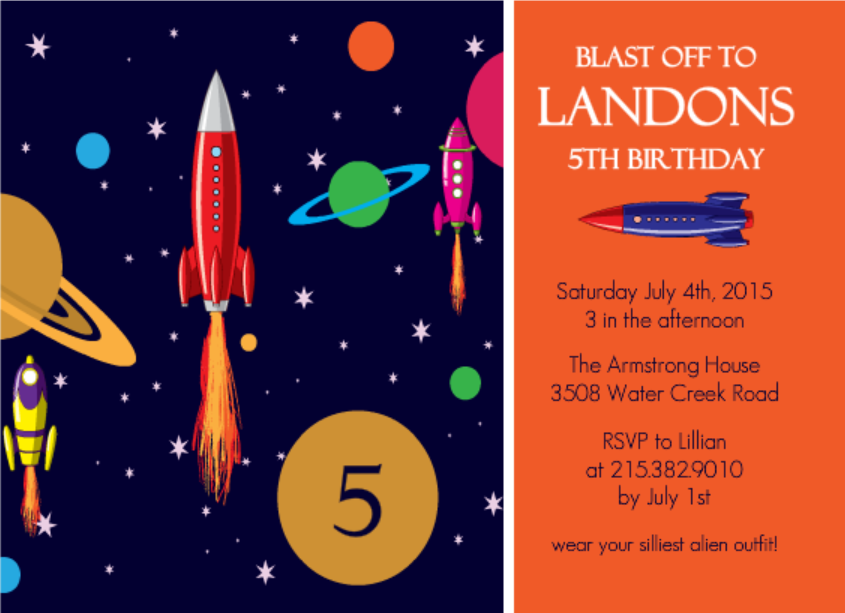 Once kids start school, they learn how cool science can be. For kids ranging from 6 to 10 years, science-themed birthday parties are very popular.  Set the tone with amazing kids’ birthday party invitations. Then get into the groove and choose from dozens of fun science birthday party ideas using simple supplies from around the house and a little creativity. The afternoon can easily be filled with cool science experiments and games, and the children are sure to have a blast.

As the theme of your party is science, sending out birthday party invitations in a scientific fashion would be a great idea. You can use paintbrushes or toothpicks to write the science party details with milk on white paper. Then ask your guests to heat the paper over a candle or in the oven (under adult supervision). The heating of the paper will reveal the invitation text.

You can also customize any of PurpleTrail’s kids birthday party invitations. Select a white and blue theme and add a personal touch by putting pictures of Albert Einstein with his tongue stuck out on the front of the invitations. For a title, you could write “Oooze on over to Payton’s for a Science Birthday Party!” in a whacky font. If planning science experiments, ask parents to send kids in old clothes because things just might get messy.

For science birthday party decorations, think about all the things you would see in a laboratory.

For a science party a good way to wow your guests would be to serving them an “Erupting Volcano Cake“. You can use a a 9” round, Wilton wonder mold for the dome top. You can frost it with chocolate frosting and add some green tinted coconut around the bottom for vegetation. Then you can use graham cracker crumbs to create a “beach”, and put a couple mini people from the doll house on an “Airheads” beach towel. Then create some palm trees using green Airheads and pretzel sticks, and stream down some melted red candy around the top and down the sides to look like a volcanic eruption. The kids and parents will be awed by the erupting cake, and they will all enjoy eating it.

It’s a science party, and none of the guests should return home without a souvenir. To remind the kids of the good time they had, send each child home with a favor bag that includes silly putty and magnets, a pencil, some space stickers, a balloon, some candy, and a small memo pad that served as their lab notebook. You can also give them a small personalized notebook that has some easy and safe experiments for them to try at home with their parents. And add some magnets, small magnifying glasses, balloons, alka selzer and any other unusual things they may need to do the experiments at home.

With a little preparation you will have a great birthday party that offers a close look at the wonders of science!

We hope you enjoyed these science birthday party ideas!