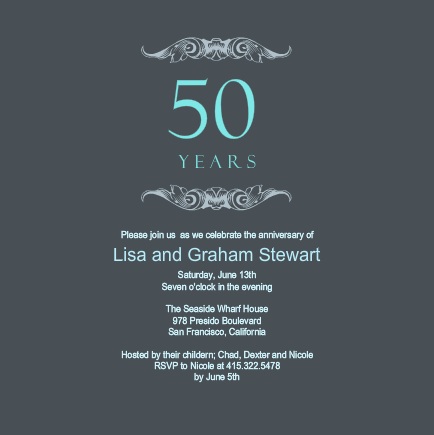 Can anything be more special than celebrating 50 years of togetherness? The momentous occasion that marks fifty years of marriage is traditionally symbolized with gifts of gold. As you toss around 50th anniversary party ideas, remember to set the tone with amazing 50th anniversary invitations. Check out the following tips to plan a grand golden anniversary party.

When Should The Celebration Take Place

When thinking of 50th anniversary party ideas, the first thing that comes to mind is deciding when to celebrate. The most obvious choice would be on the special day itself, but chances are that the couple has their own plans for the special celebration. The next best choice is the nearest weekend to allow both the couple and the guests to attend without having to take time off work, etc. Try to avoid holiday weekends and weekends with large civic events as most hotel rooms will be booked and traffic will be heavy.

Start with family. Then add in, friends, coworkers and colleagues from groups and organizations the couple may be members of. And most importantly, consider who the couple will want there, not who you want to invite. Ask close family members and friends to help compile the guest list.

Activities to do as a Host:

Let the decorations of the venue be symbolic for your anniversary celebration party and create the perfect ambiance.

More Ideas To Add To The Decorations:

If you want and can afford a caterer, get one. That way you will have time to mingle well with your guests and take care of the honored couple. If you cant afford it, though, then try to prepare foods that you can make in advance. Casserole dishes are a great option because they just need to be heated up. However, you will want to make sure to include some of the couples favorite dishes as well. Stock up on sodas, wines, and beers too, so that you dont have to play bartender all night long. Select a memorable menu for the not-so-newlyweds. This could be a meal based on the menu they shared on their first date, or consider recreating the menu from their wedding day. Another idea is that it can be the favorite meal the wife has cooked for her husband over the years – only this time she doesn’t have to do the cooking!

Gifts For The Couple

When shopping for the couple, consult people who know their tastes and preferences. Interpret gold as treasure. A gold key for key rings, golden caviar and tasting spoon or a storage chest or wooden box make ideal gifts. Jewelry is an obvious, and good, choice when looking for gold-themed gifts, especially when the item itself is unique. But sometimes the most precious gifts cost very little, a framed picture of the family or a poem written by one of the children will be a priceless gift that the happy couple will cherish forever.

Anniversary Party Favors for the guests: