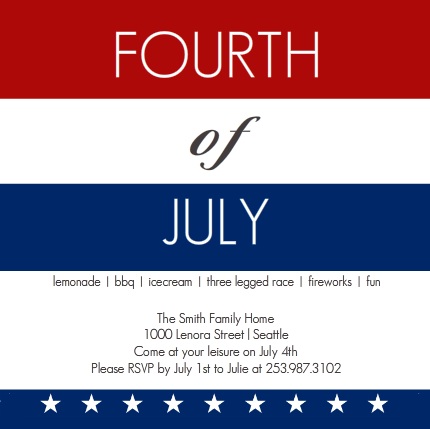 Here are some great 4th of July trivia ideas you can use for an upcoming Independence Day celebration. Everyone loves trivia. Incorporating trivia into your 4th of July celebration will really make your party a hit. You and your guests will have a blast playing and enjoy learning more about the history of the holiday and America’s independence.

Check out the fun facts and trivia below to learn more about Independence Day. Think of a creative way to organize your trivia game. You can divide your friends up into teams, include prizes, and add additional rules to make things more interesting.

In 1776, the Declaration of Independence was approved by the Continental Congress. Thereafter, the 13 colonies embarked on the road to freedom as a sovereign nation. This American holiday is traditionally celebrated with parades, fireworks, and backyard barbecues across the country. As you send out your July 4th party invitations for your 4th of July bash, take a minute to think about how much you really know about what we are celebrating.

American’s truly embrace their freedom, liberty, and independence. Check out some of the facts below to learn more about how patriotic certain places and people in America can be. These details will make great additions to your 4th of July trivia game!

4th of July Trivia – History of the Holiday

Here is some 4th of July trivia regarding the history of the holiday. Ever wonder how early Americans celebrated their independence? Read on to find out. You’ll be surprised to learn how the holiday has evolved over time.

We hold these truths to be self-evident, that all men are created equal, that they are endowed by their Creator with certain unalienable Rights, that among these are Life, Liberty and the pursuit of Happiness.
-The Declaration of Independence 4 of July, 1776.